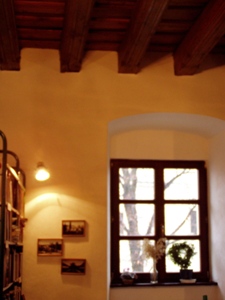 The building construction consists of a two storey structure with basement dated around the 1580s. The owners of the castle and estate at that time were the Thurzos. They held the area until 1636 when the last family member Michael died. According to known data the building (a bourgeois apartment or a house at that time) was built during the Thurzos ownership. The Palffys reconstructed it in the 18 th century.

The baroque reconstruction was made by the Palffys after a fire in 1742. During the archaeological research of the place made by Pamiatkovy urad SR (Heritage Office of the SR) in Bratislava in 2004 it was found out that the soil about 40-60 cm below the surface, was burnt, black and contained pieces of ceramics, broken glass, iron objects and burnt loam. In addition to these finds original basement ventilation holes were found on the north and east sides of the building. It can be assumed that the façade of the building was higher, as the original level of the ground was much lower than it is now. Among archeological finds borrowed from Pamiatkovy urad and exhibited in the local library, interesting are also pieces of ceramic tiles from 17th-19th centuries, glazed green with plant and geometric ornaments or coats of arms. These tiles are probably from Bojnice pottery workshops where several potters and tile makers worked. Similar workshops were also in Nitrianske Pravno. There have been a lot of ceramic finds from the 16th-19th centuries like pots, bowls, jars, with, green, yellow and brown glaze.

After the fire in 1743 the Palffys rebuilt the structure in baroque style. The barrel vault of the basement was reinforced, the ceilings of the rooms on both stories were changed into vaults, as was the staircase, the main entrance and main entrance and façade were rebuilt. Above the entrance of the building there is a coat of arms of the Palffy family. At this time the building façade was decorated in black and white. 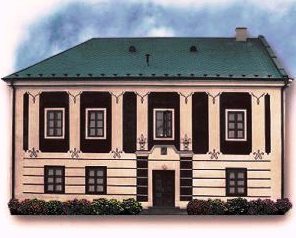 The structure of the library was rebuilt several times in the 19th and 20thcenturies. The original function of the building is not known. General opinion has the building being used by the Forestry office of Bojnice estate which supervised also the forests in Handlová and Pravno valleys as well as some other areas in Horná Nitra. From the land register it is known that there was a pub in the building in the late 19thcentury. In the 20th century the building was bought together with the castle by Bata, who changed it into his staff quarters and was the owner till the end of the 2nd World War. After 1945 the building belonged to state forestry administration. From the year 1949 there were classrooms of a secondary school and since the year 1967 there has been public, then town library. Later a textile shop and shoe repair was downstairs.

During the architectonic historical research organized in front of the building in the 1980s, original renaissance decoration was uncovered, with beautiful corner quoin. From later period comes the baroque decoration of the front façade with black rectangular mirrors (boards) around the windows and ornaments between them. This decoration is from the year 1743. According to the original decoration its copy was made on the new stucco. In the reconstruction period the decoration around the main entrance was also renewed - it has the form of black blocks with vases on the top.

Unfortunately very few people remember the beautiful baroque façade of the library. Most of the people remember only a damp building with a deteriorating stucco exterior. After necessary reconstruction and dehumidification of the building the town of Bojnice decided to change the windows and restore the façade. 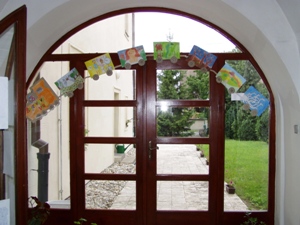 Despite the problems, the head of the research, Master of Arts M. Surin found out that the baroque decoration was richer and of a bit different measurement than was thought from previous reconstruction. At that time blind painted windows were renewed. They were found on the eastern and western façades in 2005. A part of the baroque decoration included scrolls around the windows. From the preserved decoration though, it was not possible to renew the original baroque decoration without making up ornaments at the entrance and on other parts of the façade.

Under the baroque façade an older renaissance façade was found, e.g. corner quoins with carved line in stucco. Renaissance windows were smaller, they had stone scrolls framed by a thin white carved line.

The renaissance façade is simpler, it integrates the building and it was less complicated and costly to reconstruct than the baroque decoration. Interesting is the fact that the original entrance was through semicircular portal with a gate. It is possible that later it was moved to eastern side of the plot. The proportions of this stone portal correspond with proportion of the entrance to the library. Well-marked stone portal to the passage of the library was situated opossite the similar stone portal of the former brewery building. It would not be convenient to remove the portal so a simple copy was produced in the stucco. The library has its façade renewed according to found renaissance decorations which included smaller windows, scrolls and corner quoins. 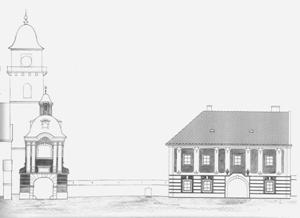 Located next to the library are St. Martin's Church and St. Jan Nepomucky Chapel. According to Ing.arch. Livia Blahova it is mainly the Chapel which together with the building of the library created well-marked and beautiful corner of the square in the 2nd half of the 18th century. The research restoration of St. Jan Nepomucky Chapel was made by Mgr. Art M. Holon and Mgr. Art I. Havasi. The documentation of the library was made by Master of Art M. Surin and Master of Art D. Hagara.